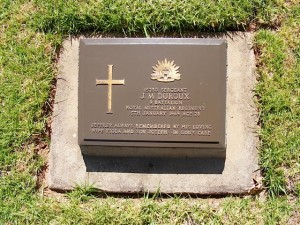 15230 Sergeant Jeff Duroux, an indigenous Australian, was born in Grafton, NSW.  He served with 6th Battalion between 8th June, 1966 and 2nd April, 1967 on his first tour of duty in South Vietnam.  A member of D Company, Jeff was a veteran of the Battle of Long Tan.  Following his return to Australia and because of his military experience, he was posted to the newly formed 9th Battalion.

Jeff’s service with 9 RAR, Vietnam, commenced on 5th November, 1968.  On Operation Goodwood, which took place in the Hat Dich area, 30 km n.w. of Nuit Dat, Jeff served with 4 Platoon, B Company.  During hostilities his Platoon made contact with the enemy, and on 5th January, 1969, aged 28 years, 15230 Sergeant Jeff Duroux was killed in action.